As part of the the Western Branch of the IPS were offered a stand for one day to demonstrate our craft and give the IPS a presence at the event. Rather than have members working on individual projects, it was suggested that we should work on a series of rotary cut blocks which could then be hand-quilted and assembled into a quilt at a later date. 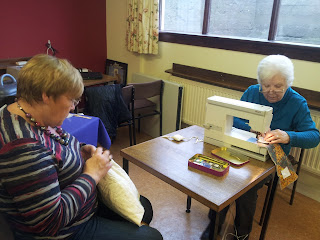 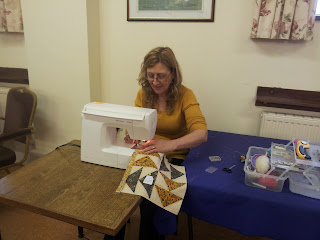 Brenda Maloney of Clew Bay Quilting kindly donated the three fabrics: a blue/green, a gold and a cream.  A selection of blocks was made from Once More Around the Block and we were off. Volunteers on the stand were asked to bring a square of cotton wadding and cream backing fabric. Once on the stand they demonstrated rotary cutting, piecing, pinning and then hand-quilting on each block. On the day we had some young visitors who made mini dolly quilts. One parent confessed that she had made a quilt years ago in school with.....Rita Scannell! 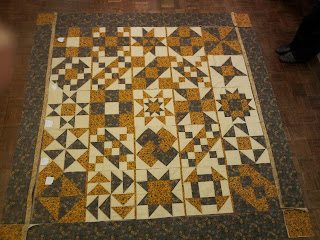 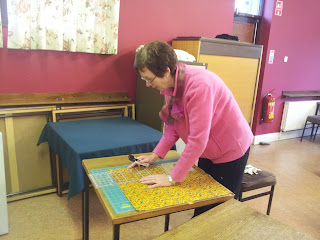 At the end of the day we had 7 blocks completed so at the September meeting members were invited to take a block and return it quilted to the January meeting where we would put them all together. There were 25 blocks altogether.  So that's what we did. Colette took on quilting the 4 border pieces and Margaret did the corner posts.   Mari attended to the difficult task of squaring up the blocks. Once we had agreed a layout the blocks were numbered and joined using binding strips. 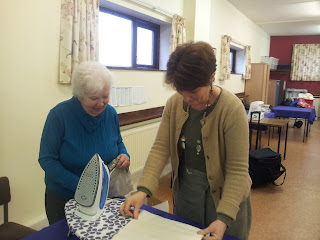 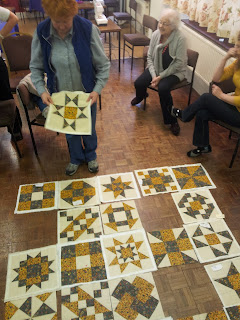 By the afternoon's end the blocks  had been sewn into rows and neatly hand-sewn at the back. Thank you to the elves who cut, pressed and sewed. We hope to complete the job after the March meeting and hand it over at the May meeting. 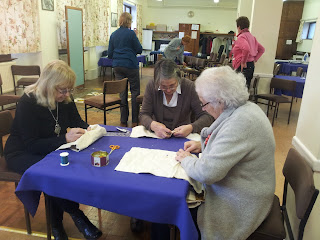 Posted by Western Branch of the Irish Patchwork Society at 6:35 AM 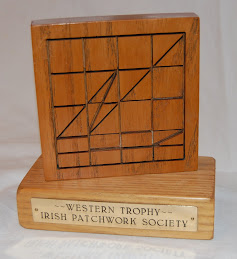